Naively, I didn’t expect a pandemic to stop the post. Of course, things would shut down and we would all stay home as much as possible in order to stop the spread of the terrible virus that is wrecking everything. But the post falls into that essential category of things in my mind, and the post office is still open, which to me says that the post is still up and running. But I never thought about the airplanes that carry all the packages the post is busy trying to deliver. The post, it turns out, doesn’t have its own fleet of airplanes. They contract with planes that are already flying back and forth across the ocean to take some mail with them. But now that no one is travelling/allowed to travel, the planes are grounded. There are no Air Canada flights to Tokyo until at least June! So there are no planes to bring the post from Tokyo to me. I have been waiting for a package of books sent via EMS for over a month now, and I fear I may never see its sweet contents. If only I had chosen SAL and put that package on a boat! Those books would be getting to me right now and I would have paid half the shipping price.

But at least all my years of hoarding books are paying off! Yes, although I am waiting impatiently for a box of fresh manga and novels hot off the J-presses, I do not lack for things to read thanks to a habit of always buying far more books than I could possibly read at any given time. I have several shelves and stacks of books that I haven’t read in both English and Japanese, plus a few in French and even a couple German books (purchased at a time when I was more optimistic about my German abilities). All these unread books mean that things get buried and lost in the library of the unknown until one day when I go searching for something very particular to read. Usually that search is less “I want to read a book about monkey wizards attempting a jewel heist” or some specific topic and more about me rejecting one title after another as not the book I want to read right now, for reasons unknown even to me. This leads me to dig ever deeper in the shelves in search of the right book, and this time, that hunt led me to classic shojo manga artist Yukari Ichijo. 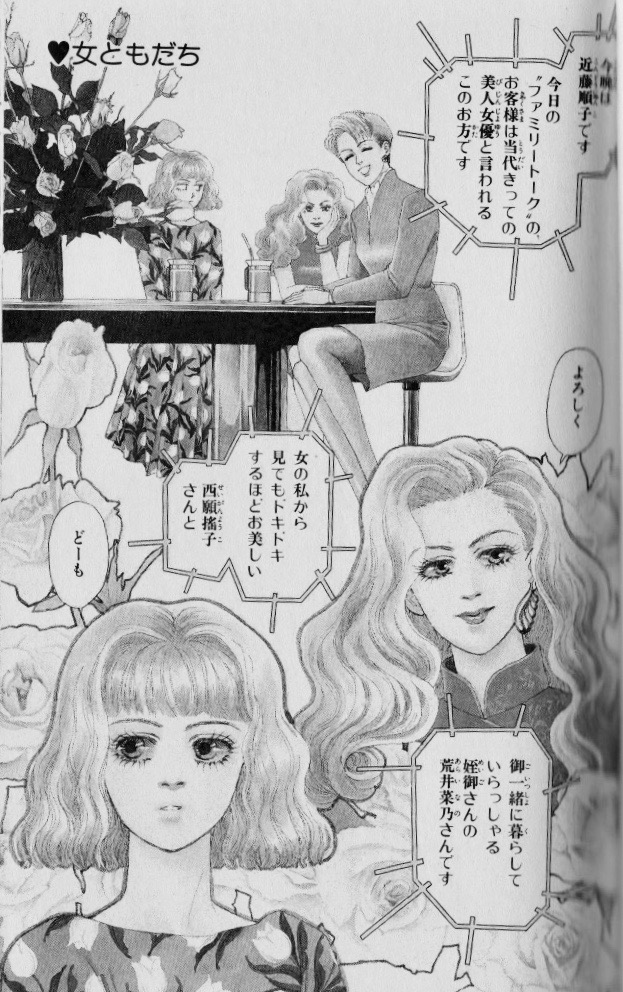 Onna Tomodachi came as part of the package when I bought Designer on Yahoo Auctions. Designer was the book I was interested in reading, but I will never say no to bonus manga. But the cover of volume one is a little off-putting (to me, anyway) and volume three has the protagonist surrounded by a random assortment of dogs for some reason, neither of which sparked any real desire to read the series in me, so I shoved it to the back of the shelf and forgot about it. But then I wanted to read some manga. No, not that Tsuchika Nishimura book. And not any of that pile of doujinshi. Also no to that Akane Torikai. And then there it was, Onna Tomodachi. The very thing that I was dying to read. It turned out what I was really craving was some solid shojo drama.

Much like Designer, Onna moves at breakneck speed from one dramatic twist to the next. They even share a couple plot points. To be fair, she wrote one in 1974 and the other in 1991, so I can’t fault her for forgetting she already used the “hot girl injures leg and has to give up modelling career”. But her strange fixation on the “hot girl dates older man who turns out to be her father” is incomprehensible to me, and I seriously do not get why she brought it back in Onna, except for maybe the sheer drama of it all.

Nano lives with her aunt, famous actress Yoko Seigan, and the story opens with the two of them appearing on a wide show together, so you know this is no ordinary high school shojo here. But of course, Nano hates the fame, and she hates how shallow her aunt is. She just wants to graduate high school, go to university, get a nice office job, and then get married and have a family. She’s not the least bit interested in being in the public eye. Her best friend Kozue, though, wants nothing more than to be in the public eye. She works as a model while she looks for her big break into acting. So when she lands a modelling job for the photo book of hot young actor Haruomi Noguchi, she’s super excited but also a bundle of nerves. She begs Nano to come with her for moral support, and this is the start of Nano’s quiet life out of the spotlight being completely undone.

This is classic shojo, right down to the heroine having an attack of anemia and passing out dramatically in front of all the characters who matter to her storyline. (As an aside, what is the deal with anemia in Japan? I know I have wondered this before, but the prevalence of this as an excuse for all kinds of poor health or weird behaviour in J-manga and fiction is so bizarre to me. Was there a national crisis of anemia at some point in the past that I’m not aware of? Why is this the go-to illness whenever anyone needs to be in the nurse’s room in order to advance the plot?) Our hero has a rat’s tail in both the back and the front, which is a look I’ve never seen before and hope never to see again.

But this series is compulsively readable, and that’s all thanks to Ichijo’s incredibly expressive art and storytelling. There are so many facial expressions in every scene! Everyone is constantly reacting to everything, and I really love it. No one is hiding anything. Even if you don’t read a word of Japanese, you could probably follow the larger beats of the plot just from the way characters look at each other. There are also some great late eighties/early nineties looks in here, especially when the girl gang of movie star fans show up to beat the crap out of Nano. Visually, this book has everything. And the story is such a wild ride that once again I am forced to wonder why none of Ichijo’s work has made it into English. I know part of the answer: translating older books is a lot more work since nothing is digital. But we’ve done it for other older books (mostly shonen/seinen stuff, and you know I am looking at that sexist style with a serious side eye), and it’s about time we had some of the shojo greats in English. We need this drama, now more than ever.