You may or may not know this, but I am a translator of all things manga. Perhaps I have mentioned it before? I also translate novels and other bits of textual creation, but the market for those is sadly not as robust as manga, so I mostly translate manga. And I am very happy to do it! And after more than a decade of being paid to stay at home and read books for a living, I have become extremely unsuited to any other sort of job, so please. Keep buying books in translation and keep me employed.

Fortunately, I do not lack for work these days, and one of the series I’m currently translating is Tamekou’s My Androgynous Boyfriend. Reader, it is the purest of pure joys. If you have not picked up volume one (which came out very recently), I highly recommend that you do. It is a gentle unravelling of toxic masculinity and socially mandated gender performance, yes. But it is also a sweetly slow-moving tale of two adults who love and respect themselves in a relationship where both are equal partners and both love and affirm the other without any judgment or condemnation of any kind. Translating it is a balm to the soul, a reminder that we don’t have to be who we are supposed to be, we can just be who we are and there will be people to love and accept us. I love Wako and Meguru so much, in the way that I love Mii-kun and Kei-chan. They are a beam of healing light in my life and I want nothing more than to read about them being happy together forever.

Which is why I figured it was about time I took a serious dive into Tamekou’s other work. I’ve come across their work in the pages of OnBlue (the best BL magazine and I will not be listening to any opinions to the contrary), but I’ve never bothered to pick up any of their books, even though I’ve always been enamoured with their clean lines and generally adorable art style. So when I was poking around in the BL section of my favourite bookstore and my eye happened upon the two volumes of Lala no Kekkon, I took it as a sign from the BL gods and marched up to the register with books in hand.

First things first: this is not the healing journey that My Androgynous Boyfriend is. I wasn’t expecting it to be because BL. Very few BL relationships are just plain loving and kind without any weird complications. The weird complication in this case is the titular Lala is actually Ramdane, Lala’s twin brother. When his sister is forced into marriage with a local chieftain’s son, Ramdane helps her flee with the man she actually loves and takes her place at the wedding ceremony. His hope is that he can keep Lala’s would-be husband Wolsey from discovering the switcheroo long enough for Lala to get far, far away. But then his new husband leads him out of the wedding banquet into the bedroom where the newlyweds are expected to consummate their marriage before the end of the celebration and proceeds to do exactly that. Now you may be thinking at this point, this new husband can’t possibly not notice that Ramdane is a guy when they are getting all hot and heavy. But he does not! And as you wonder whether if this Wolsey is just really dumb, you learn that the truth of the situation is nowhere near as simple as Ramdane initially believes.

The whole thing takes place in an imagined country that seems influenced by Mongolia in an unspecified era. The people ride horses, hunt with bows and arrows, trade with neighbouring villages, and generally live a country sort of life. Being the son of the head of the province or whatever the regional division is called, Wolsey has servants and fancy food and beautiful clothes, all of which Ramdane gets to share once they’re married. So there’s a sense of luxury to much of the book, and I was particularly fond of Tamekou’s careful depictions of the regional costume. It occasionally calls to mind A Bride’s Story, although Tamekou’s work is far less complicated and detailed, but still beautiful. 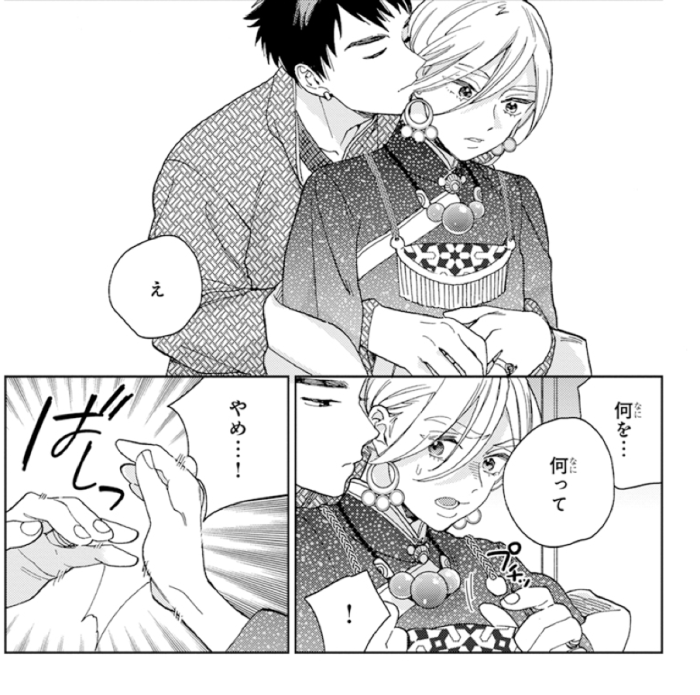 And this volume brings the schmex! Right from the opening pages, we’ve got mystical glowing phalluses and a variety of explicit sexy times. None of it is exactly non-consensual, but it still has a rapey feel in that Ramdane feels like he has no choice but to follow through on the charade that he started. So if that level of ambiguous consent is a no-go for you, this is probably a series you should stay away from. But the relationship between Ramdane and Wolsey develops nevertheless in a pretty natural way, from Ramdane’s perspective, and there are real feelings between them. 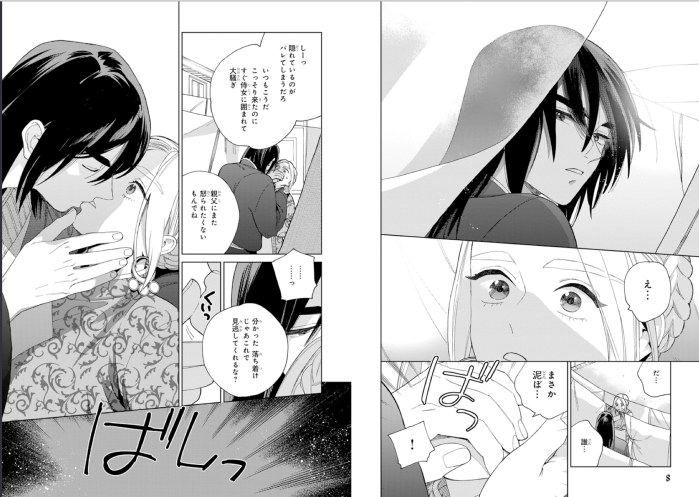 It was distracting at first how Ramdane resembles Androgynous’s Meguru and his maid is looks more than a little like Wako, like this is somehow a time-travelling version of Androgynous and those two will get together in the end. But the resemblance isn’t strong enough to take the reader entirely out of the story, and after a chapter or so, I basically stopped noticing it. Tamekou’s a great storyteller, and they drew me into the tale of this strange marriage soon enough, so that I grew entirely engrossed in the little details of life in this far-off country. It’s a rare BL that creates an entirely new world for its hot dudes to love each other in, and I loved exploring it. I’d honestly be delighted to see more of this fantastical world-building in BL. Haven’t we had enough high school love and office romance? Let’s bring on the BL in space!

2 thoughts on “Lala no Kekkon: Tamekou”