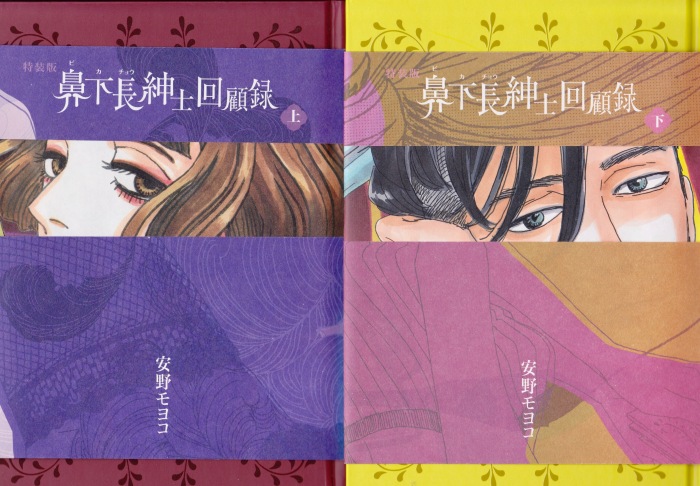 It comes up every so often on the interwebs—or maybe only on Twitter which is where I spend most of my interwebs time—this idea of not starting a series until it’s finished because you want to read the whole thing at once. Or you worry that the publisher will drop it before it ends. And pretty much everyone involved in the making of series of books comes forward to say that this is the surest way to get a series cancelled. The terrible law of attrition means that sales of volume one are pretty much always the highest and it only goes downhill from there as some readers find they actually aren’t all that into the series or they move onto other books and forget about this one or they move to a shoebox apartment and can no longer buy books and keep them in their house the way they’d like to or they ran out of money and buying books is the last thing on their list. There are plenty of legitimate reasons for not continuing with a series, but anyone in the publishing industry will tell you that fear of the series ending prematurely is not one of them. When a reader doesn’t buy the first volumes in a series for this reason, they are basically signing the death certificate for the whole endeavour.

And as a person in the publishing industry, I am well aware of this fact! (I’m also well aware of the fact that pre-ordering a book is the best way to get it on shelves and boost sales in the crucial weeks after release, but I cannot be that together of a grown-up human being. To know what I will want to read in the future?! That is some kind of black magic and will probably end up with me roasting in the flames of hell.) But! I am also a deeply forgetful person. And the time between publication of between one volume and the next is basically enough for me to have forgotten the entire premise of the series. So reading books as they come out is basically an exercise in frustration and repetition. What is an absent-minded reader to do?? It’s simple, really. Just buy them all as they come out and then read them when the whole series is done.

Obviously, the question that then arises is how you know if you are willing to invest in a series without reading any of it. And I have a couple rules of thumb for that. One is to read some of the series. So easy! Get volume one and read some of it. Are you into it? Then put that puppy back on the shelf and keep buying volumes as they come out until the whole thing is done and then walk right in and wallow in that lengthy series. The other is sheer name power. Do you like this author? Have you enjoyed everything else they’ve done? Then just buy the series and read it when it’s done. You’re pretty much guaranteed to enjoy it on some level, if only to frown and reveal yourself as a True Fan; their earlier work was so much better. 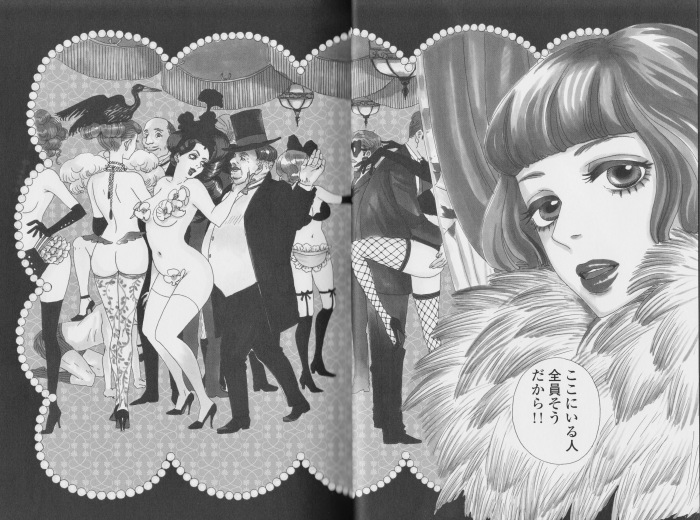 Method one is how I’ve been handling ongoing series like A Song of Ice and Fire and Juza no Ulna (which is finally finished and I can’t wait to get cosy and read the whole series start to finish!), but method two was my approach when it came to Moyoco Anno’s French brothel drama, Bikacho. So much of Anno’s work has resonated with me, and like all former TCAF guests, she has a special place in my heart, if only because I had to spend so much time thinking about her and her work for that period of time. Plus, this series was published in a gorgeous hardback version alongside the usual paperback manga, and I could not resist having such an item of luxury on my shelves. (Japanese publishers almost never do a hardback edition of manga like this, so I can’t help but credit her agency Cork for making it happen. Literary agents are not really a thing in Japan—most authors are repped by their publishers when it comes to foreign rights and things—and I am into Cork coming on the scene and trying to fight for better things for the authors.) But by the time the first volume came out, it was clear that this was a series that was not going to end anytime soon, despite it being only two volumes long, so I put that lovely hardcover up on the shelf and tried not to think about it. And given that volume one came out in 2015, while the concluding volume just came out in February, I was not wrong in waiting. 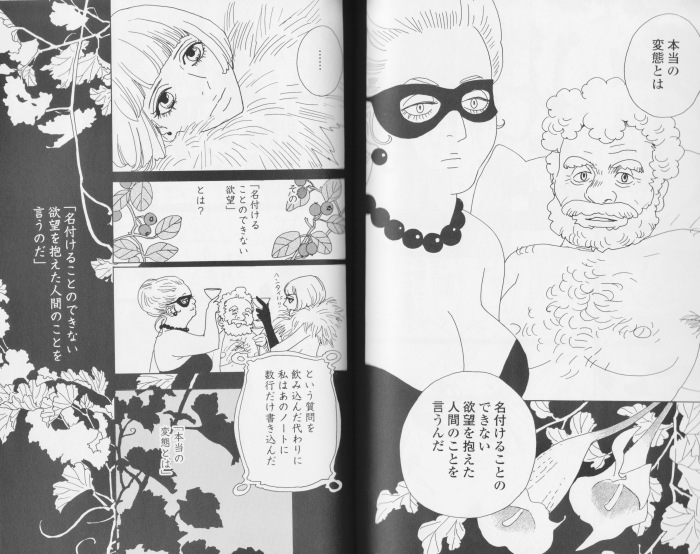 But so worth the wait! Art-wise, Anno is honestly at the top of her game with the many sex workers and clients and perversions she uses to tell a larger tale about desire and the truth of our own selves. Feather boas and corsets and masks and luxuriously appointed boudoirs frame our heroine Colette, a sex worker at the maison close Nuit des Oeufs. She’s in love with an abusive lout Léon who basically only comes calling when he needs money, but of course, she can’t quit him even with the encouragement of her friends in the maison. A Japanese novelist client gives her a notebook and encourages her to write about her life in the brothel, which she does and to her surprise, the writing becomes a kind of lifeline to hold onto when nothing else makes sense in her life. 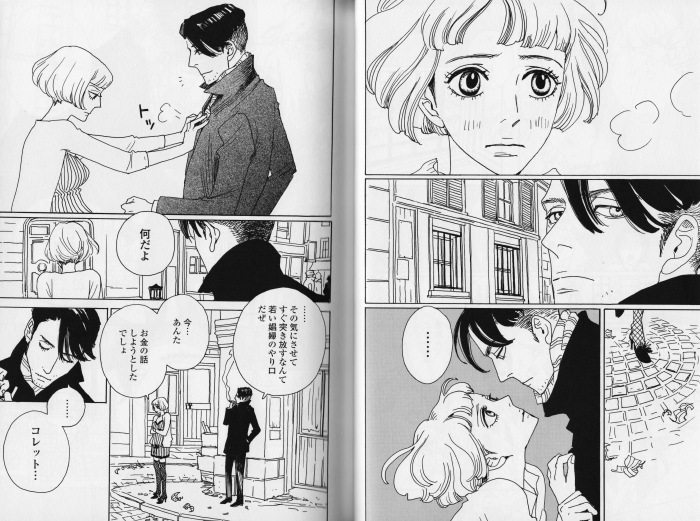 Anno gives us plenty of sexy detail on both workers and clients, my favourite being the client who wishes to be treated like a pet dog and ends up bringing comfort to Colette. And she fleshes out her cast with flashbacks and anecdotes so that everyone feels real and human, and there’s never any sidelong glances about how these women are sex workers. She tends to glamourize the proceedings—although who knows, maybe life in a French brothel at the time was this nice—but she doesn’t shy away from the darker bits of this life. In the end, it reminded me a lot of her other sex worker manga, Sakuran, although the time and place are obviously very different. But there’s the same focus on the luxury of the facade, the shabbiness of the world behind that, and the journey of a woman who manages to free herself from a life of service and pursue her own dreams, all while making utterly relatable mistakes when it comes to romance. 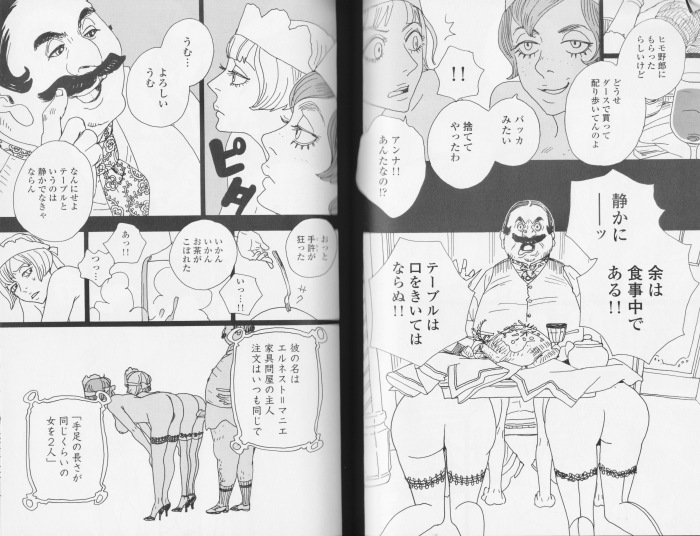