The new year has been hitting me over the head with a cast iron pan. Part of that is no doubt jet lag. Four months of languishing on the other side of the ocean will really mess with your body clock, and only now, a week after my return to the frozen shores of Canada, am I finally able to make it through an entire day without being accosted with abrupt and intense bursts of sleepiness. And part of it is just the usual scrambling to meet deadlines, with added moving back into my apartment and trying to remember where I put everything. All of which leaves me with no time for noodling around with books. Which is true sadness since my favourite thing in the world is to noodle around with books.

And this book is one I have been living with for months now. I started reading Manga Henshusha on a trip to Osaka from Cat Island in October since it was the thickest book I had to hand, and I was afraid the other slim volumes on my desk would simply not last me for the two-day journey. (Other bibliophiles, I’m sure, share my fear of finishing a book in the middle of a trip with nothing else to pick up after it.) But it’s also a book I’ve been looking forward to reading since it was released in the spring of last year. Because I am obviously interested in all the bits and pieces of the manga world. Take that clock apart and look inside. Plus, cover illustration by Natsume Ono!

Shunsuke Kimura has done a few books of this nature where he interviews people in a particular field, including Shigoto no Hanashi which comes up a few times in this book and is pretty much next on my list of what to read, since it features interviews with Moyoco Anno and Daisuke Igarashi, among others. The basic idea is that he takes a few hours and really lets people tell him about themselves, without inserting himself into the conversation insofar as possible. So in Henshusha, all the interviews are presented as a kind of monologue by the five editors he talks to.

Fortunately, Japanese is a language where repetition is natural, so possibly awkward breaks are smoothed over by the editor repeating the question and then proceeding to answer it. This monologue format actually makes for a deeper, more focussed read than a Q&A style interview; the reader simply slips into the editor’s mind through their voice presented as-is on the page. Each editor talks frankly about the importance of editing in manga, the state of the manga industry, how they ended up in manga editing in the first place, their relationship with their artists, and more. It’s actually fascinating to see these differing viewpoints on the same topics side by side in the same volume. There are some commonalities (unsurprisingly, all feel that editors play a key albeit changing role in manga), but for the most part, each of these editors came to the work in a different way with a different objective.

Of the five editors profiled here, I only know one of them: Hideki Egami, former editor-in-chief of the sadly defunct IKKI. He came to TCAF with Taiyo Matsumoto a couple years ago, and having spoken with him, I know he has his well considered thoughts on manga and the future of the industry, so I was really interested in seeing them laid out in this interview. And I was not disappointed. At one point, he remarks, “The manga artists I think are great seem like they’ll be able to answer the questions I have in myself,” as an explanation of how he selects artists to work with. He also steps away from the intellectual side of things to give a breakdown of sales and numbers for long-running manga, as well as an overview of how things actually work at a manga magazine and the thinking behind the creation of IKKI.

The one thing I found really interesting was that not just Egami, but every single editor interviewed stresses how important it is to find and bring up new artists. They’re constantly looking for new talent, but what that new talent is is different for each of them. I’m sure this is partly or even mostly a business thing—everything in Japan thrives on the constant turnover, finding the latest big thing—but the way these editors talk, they sound as though the thrill of finding a new manga to fall in love with is what drives them. And yes, I prefer to keep my rose-coloured glasses on, so I will accept this romanticized view of the world.

The volume skews shonen/seinen with Mikio Ikai from Comic Ryu, Miura Toshihiro from Young Magazine, Naoko Yamauchi from Big Comic Spirits, Takeshi Kuma from Gekkan G Fantasy, along with Egami from IKKI, and this was honestly disappointing for me, as much as I enjoyed each of these editors and what they had to say here. Not to mention that Ikai is the editor for one of my favourites, Fumi Fumiko, so you know I loved hearing what he had to say. But I feel like Kimura missed out on an opportunity here to get more shojo/ladies voices in the mix. I would have loved to hear from a Feel Young editor, for instance. Not only am I sure that things on the other side of the gender binary fence happen in a different and thus interesting way, but it would have been a chance to go for fifty-fifty girl-boy representation.

Also, the lone woman in this book, Naoko Yamauchi, actually had some of the most interesting things to say, and I wonder if this is because she brings a different perspective to the boys’ club of seinen. She was the one who started the whole graffiti project at the Shogakkukan building before it was torn down, so she has a lot to say about how that came together rather organically. Plus she’s the only editor to really insist upon how important it is to talk with new artists about money and what they can realistically expect to make from drawing manga. She was both the most hardnosed and dreamy of all the editors. She’s also the editor for Naoko Matsuda’s Juhan Shuttai! and I can really see her hardnosed dreamy style reflected in those pages.

On top of interviewing the editors, Kimura commissioned comics from the manga artists they edit, so that each interview is followed by a comic about them as an editor by one of the artists they edit. All are great and offer new insights into the relationship between editor and artist, but the one Matsumoto drew about Egami actually had me near tears. Maybe because I know both of them and have seen them at work together, but the way Egami is so sincerely moved to tears reviewing Matsumoto’s latest storyboard practically breaks my heart. Even more so now that I’ve read the comic that storyboard was drawn for (Goodbye, Sunny!). Kimura also bookends the interviews with an explanation of the project and his thinking in doing these kinds of interviews at the beginning, and a discussion and distillation of the ideas that came up during the interviews, which ties the book together in a very neat and thoughtful way.

The world of manga with its close editor-artist relationship can seem quite mysterious to the North American reader since we really have nothing that comes close, so it’s really great to see the whole thing demystified to some degree in this book. Now we just need to see it published in English so we can all learn new things about this world we love. (It will never be published in English though.) 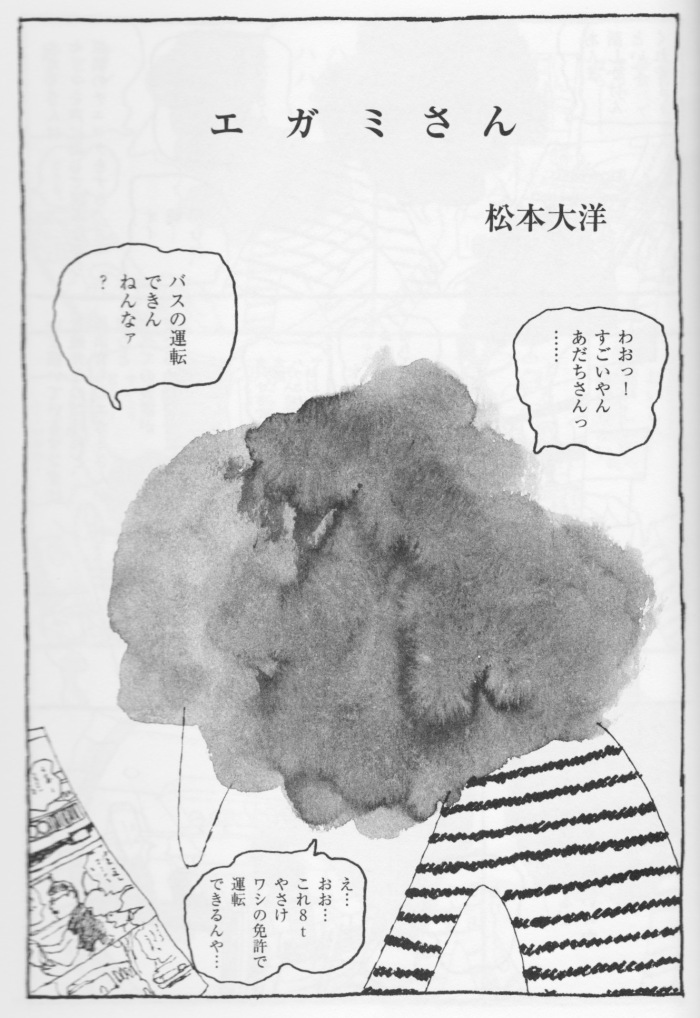