We all know I have hearts in my eyes for Yumiko Shirai’s eerily beautiful landscapes and ink washes and general lack of screen tone, as demonstrated amply by the way I gushed over her previous work. We also know that I do love an incredibly bizarre premise for a story and offer gold stars to any author who simply throws me into that story without holding my hand. So Rafnas, Shirai’s latest, should have been an easy high five. And yet it doesn’t all come together for me.

The story is on a similarly nutbar level as Wombs, maybe toned down a notch depending on how you measure these things. The title does not refer to tough eggplant, the image my brain immediately conjured up when I saw the title the first time (the title in Japanese is “rafunasu”, and rafu can be “rough” while nasu means “eggplant”. [And let me just tell you that a lot of silly entertainment can be gained from imagining a gang of eggplant toughs roaming the neighbourhood in leather jackets, cigarettes dangling from lipless mouths, looking for a fight to pick]), but rather to the name of the planet on which the whole thing is set, Rafnas.

Humans colonized the place a gadrillion years ago, or at least long enough ago for humanity to have evolved to adapt to the unique conditions of the planet. So now instead of calcium, the local population uses the ubiquitous mineral rafna in their bones. Rafna has the unique property of being anti-gravity, so the creatures of the planet, including the adapted human population, float. The humans congregate in cities and towns, as is their wont, but these cities and towns have a natural vertical element to them, with not a stair to be seen. People float up and down, seemingly at will, but actually governed by the strength of their “rikiba”, their own personal forcefield of sorts. Creatures seem to congregate near the human populations, like squirrels and raccoons, or else find homes in the “streams”, rivers of rock and animal and vegetation that stream across the landscape according to the flow of rafna deep underground. And sometimes, when the rafna is disturbed, the flow of these streams can change disastrously.

So the humans figure they should keep an eye on these streams and set up a central monitoring office, which dispatches observers to streams all over the world to take measurements and make sure that the rocks don’t get the wrong idea and start tumbling toward any human settlements. And this is where Shirai’s story begins. Rima is the new observer in a village in the middle of nowhere, and she’s super talented with a crazy strong rikiba. Other people can barely stand to be in her presence because these rikiba interfere with each other. So if the wavelengths of your rikiba aren’t in harmony, being in another person’s rikiba can cause serious physical discomfort. Which is why people wear neutralizing stones to keep people from barfing around them all the time. But something happened to Rima four years ago, and now her rikiba is so strong that only the strongest neutralizing stone will reign it in. But such stones are rare, and she is not fortunate enough to possess one.

Given that she makes other people physically sick with her presence, Rima tends to keep to herself. Until this new posting, when she meets the atavistic Ragi. He is old school, meaning his body can’t process rafna at all; it’s poison to him. So he wears a mask to filter the rafna out of the air he breathes, lives in special airtight housing, eats special food, and takes calcium supplements because it is not a thing you can get naturally on a planet where another mineral fills its structural role. And because he’s old school, he can’t fly and isn’t weirdly lithe and dark like everyone else. He’s stocky and pale and has to ride his motorcycle everywhere. But rikiba has zero effect on him. So he has no problem walking into Rima’s. 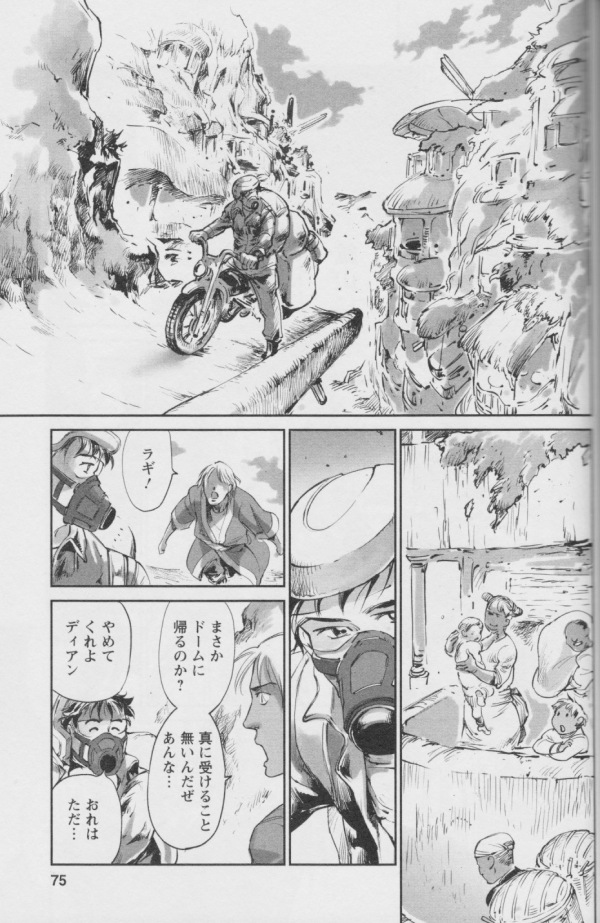 It says right there in the blurb on the back cover that Rafnas is a love story between Rima and Ragi, but I didn’t read that, so I was disappointed that that was where Shirai took it (although to be fair, it is more of the story of how they got to the point of maybe falling in love). From the cover, I was expecting a partners-in-crime type deal. And there is some of that. Ragi’s skill set (not being affected by rikiba) proves uniquely useful to Rima, and they do some fancy tricks when the stream gets weird. But the relationship seems a little forced in ways. This and a few other areas where things felt rushed made me wonder if Shirai got voted off the island in the reader survey. She laid some real groundwork and put in some serious worldbuilding to create a unique and insane place to set this story (complete with creatures that seem perfectly at home without gravity), but the whole thing is only two volumes long, and there’s a few places where I felt like she wanted to linger, but instead pushed the whole story forward.

If that’s the case, then I really am saddened because I love this world. Shirai clearly adores weird, craggy vertical landscapes, and her talent at depicting it shines here. She lingers on the streams and devotes large, detailed panels to the cliffside habitation of the humans. And she even says in the afterword that she would like to revisit Rafnas and tell the stories of the other inhabitants of the world. The inky washes and lines full of movement that I have loved in her previous work are also on full display here, although again, panels feel rushed in a lot of places.

Whether it was the reader survey, or an editor who didn’t get what she was trying to do, or Shirai herself losing confidence in her vision (or maybe just an underdeveloped vision since this originally started as a doujinshi), Rafnas doesn’t push as far as Wombs or get quite as involved in the world or the characters, which is a real shame. It’s rare to see science-fiction manga that’s not all giant robots, manga that really excels in building a fascinating, unique world for the story to play out in. Shirai has these worlds in her head and the talent to depict them on the page. I feel like all she needs is a safe space and a great editor, and she could create something truly iconic.