The cover of USCA (pronounced you-ska, as the silver katakana over the roman letters informed me) notes in English that it is an “independent manga magazine for the next generation”. Which leads me to assume the next generation speaks English? And also to hope that I will see some weird and interesting new manga being done in Japan right this second that is not welcomed by the old boys’ club that is AX. (Don’t get me wrong, I like AX, but it can get pretty dudely and punk rock snobby.) I ran across volumes two and three of USCA at Village Vanguard (the store where you will always run across a weird book you’d never heard of, but will probably like), and I got stuck on which one to pick up. They both promised me indie manga, they both had Tsuchika Nishimura’s name on the cover, and both had pretty interesting cover designs that made me want to read what was inside. But when I saw that volume two posed the question, “Don’t you wonder sometimes ‘bout sound and vision?”, my choice was made.

Unlike the serialization format of most manga magazines, USCA is made up entirely of one-shots (or at least this volume is). Seventeen authors penning seventeen different versions of the next generation’s manga. Like any anthology, it can be a little touch and go; some stuff is great, some is interesting but fails in the execution, and some is not anything I’ll be thinking about ever again.

One piece in the second category is Zajiro’s “Tsukin Mangaka-teki Seikatsu no Susume” (Life Recommendations for a Commuting Manga Artist), which outlines just how one can draw manga on the train on the way to work. It looks like Zajiro actually followed those very detailed recommendations and drew it on the train, which is both cool and awful. The whole thing is handlettered in really tiny characters that gave me a headache; it’s so hard to read that I just gave up halfway through and focussed on the images alone. (To be fair, I am generally bad with any kind of handwriting. My eyes do not like the uncertainty of the human hand.) But the art is the scribbly unpolished thing you’d expect from a manga drawn on the train; it’s not enough to support the story he’s trying to tell. Legible text would have pulled it all together to make a whole. Still, he does a lot of interesting things with panels and layouts that I really liked. I do want to see more from him, but only if he starts lettering on his computer or something.

A delightful surprise that falls into the great category is “Usotsuki Oswald”. The byline says Sandy Crossword, but it is clearly by the Nishioka Kyodai, unless someone is seriously biting their style super hard. It has everything we’ve all come to expect and love from the Nishiokas: curlicues in noses and hair, flattened perspective, richly textured surfaces, and a story that starts in one place and then takes you somewhere totally unexpected. The one thing that struck me as being different from other work that I’ve read by them is that this story is funny. And although the Nishiokas are occasionally grimly humorous, they’re not usually making straight-up jokes. But this story—about Oswald and his fantastical stories and his bar buddies rolling their eyes as he recounts another one of his tall tales about a land he visited for work where people were paired off with animals to live together, sometimes to be mauled to death—actually has a punchline. And it is a pretty good one.

My delight in the surprise appearance of the Nishiokas was cancelled out by my disappointment that the Natsujikei Miyazaki story is one I’ve already read. Granted, it was one I like, “Naho-chan’s Shiroi Tamagoyaki” in which the boyfriend of the titular Naho discovers that her tamagoyaki comes from a can and loses it, but I was hoping for something new. 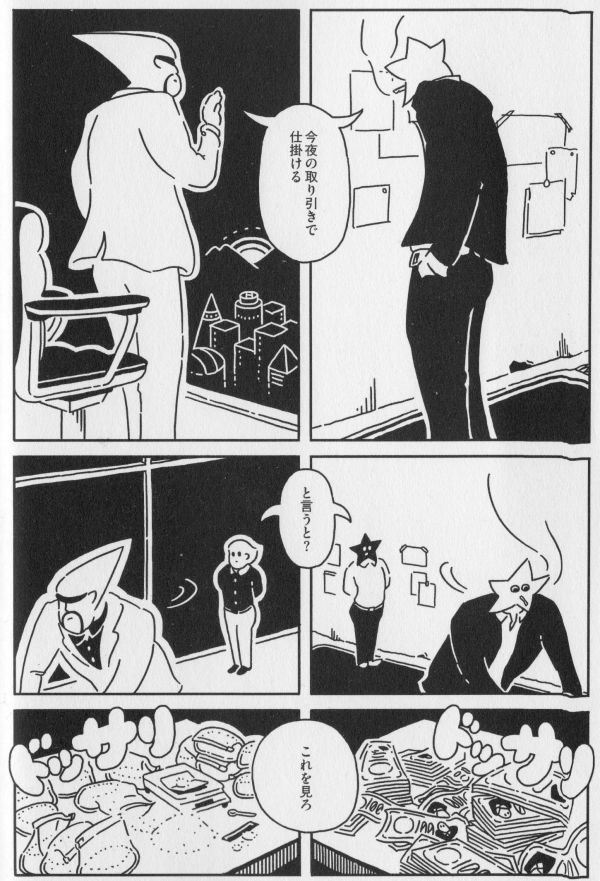 But my disappointment was actually quite fleeting. There is so much newness to discover in these pages. Like error403’s “Dogongushan” and its telling of two sides of a deal between criminals. Black and white are inverted to show each side of the deal, so the crime boss on one side is wearing a black suit, while the one on the other side is in white. And Black Suit is in well-lit places with white backgrounds, as White Suit stares out into an inky black night sky. The way error403 manages to write dialogue that works for both sides to craft a coherent narrative is an impressive feat. And the climax of the story is almost entirely wordless and essentially abandons panels completely to convey the chaos. 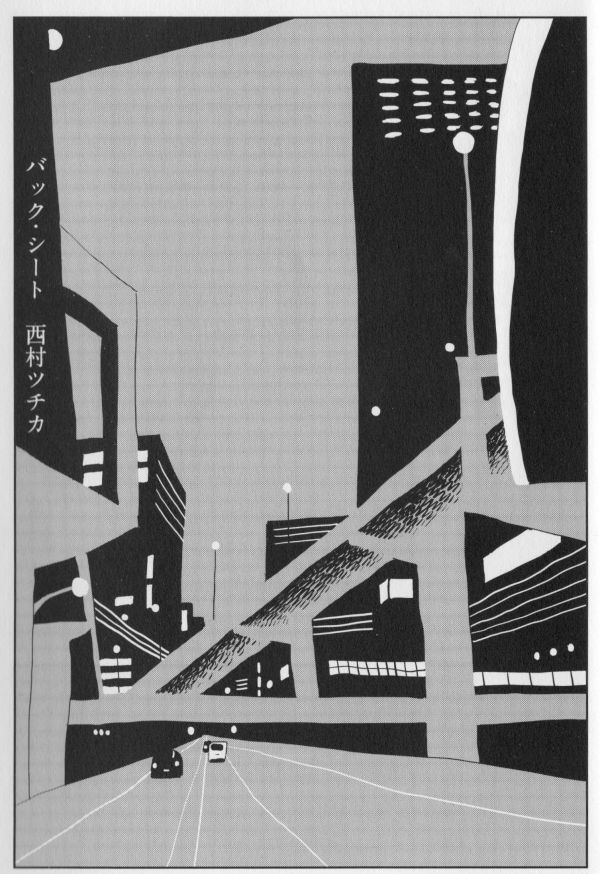 “Back Seat” by Tsuchika Nishimura is another bit of interesting weirdness, a cab drive with a petulant fare in the back seat that’s wobbly and squirmy and yet perfectly conveys the feeling of sliding through the city at night in a cab. And Keita Katsushika’s “Machiato” tells its small story by making every page a panel, showing a different view of the city as a young couple walks through it, complete with the overhead snippets of conversations of passersby. “Meter” by Bridge Shiphouse makes the reader flip the book on its side so the story of a junior high school girl pushed to the brink by an irritating classmate can saunter down two pages without interruption, something I really enjoyed. Some pages made better use of this extended format than others, though, and I found myself wishing that each of the two-page spreads flowed together more smoothly and took advantage of the opportunity that the spread offered in terms of storytelling.

For nine hundred and fifty yen, though, USCA is a serious story deal. A great showcase for what’s going on these days in the indie manga scene and a chance to come across some artists you might never otherwise meet. I’ll be getting volumes three and four when I’m on the other side of the ocean again.