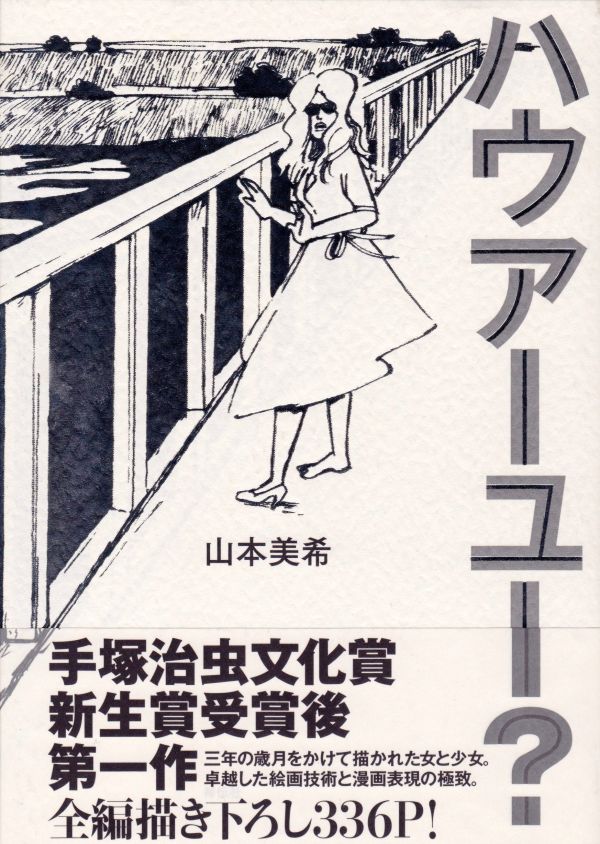 I don’t know if I’ve mentioned this before, but I have this thing about lips in art, comics in particular. They often end up weirdly central for me, a constantly occurring part of the book that I can’t stop noticing. Sometimes, the style of the lips can ruin a whole story for me and I just have to put it down. And it’s never the same style. It’s just a vague something that catches me and won’t stop nagging at me as I read. When I first read Kyoko Okazaki, I was glad her writing and art otherwise was strong enough to pull me through all the lips. And I’ve noted before how weirdly fascinating I find the lips of Usamaru Furuya. So when I saw How Are You?, I could tell just from the cover that I was going to have some trouble with those lips. The obi tried to tempt me with the announcement that Yamamoto had won the Tezuka New Artist Prize last year and that this book was actually written like a graphic novel—i.e., not serialized in a magazine—but then my eyes would slip back up to the woman on the bridge and those lips, and I would reach for something more lip-friendly.

And then I went to this talk between est em and Naito Yamada to celebrate the release of the third volume of Ippo where I ran into Ken Niimura, a great manga maker himself (whose work has actually been released in English, so go check it out!). The talk was in a bookstore (they have lots of events so if you are in Tokyo, you should go!), so after the talk, Ken and I got a beer (books and beer!) and poked around the shop’s manga, recommending things to each other. And he was really adamant about one recommendation in particular: How Are You?. He has never steered me wrong before, so I pushed aside my lip-related misgivings and grabbed a copy.

What I learned is that I really need to get past this lip thing. Because How Are You? is incredible and thoughtful and beautiful and a bunch of other hyperbole. It centers around the relationship between junior high school girl Tsumi and the foreigner Lisa who lives next door to her. Lisa is tall and beautiful and blonde, straight out of a movie, and Tsumi adores her. More than adores, she almost wants to be her. In the back of her schoolgirl mind is the vague idea that when she grows up, her hair will be as flowing and beautiful as Lisa’s. But Tsumi is Japanese, so her hair is never going to just suddenly become wavy and blond, she is never going to be a glamorous blonde, a fact she comes to grip with over the course of the book.

The book starts with an idyllic portrait of a happy family and Tsumi’s peek into it from the outside. Lisa is watering the large garden in the front yard of her family’s old-school Japanese house, while her Japanese husband is sitting on the deck writing haiku, and their teenage daughter (older than Tsumi) is being petulant. In these first few pages, Yamamoto deftly sets up the dynamic between all the main characters so that she can upend the whole thing for basically the rest of the book. The day after this lazy Sunday, Lisa’s husband disappears and the next three hundred pages are the aftermath. 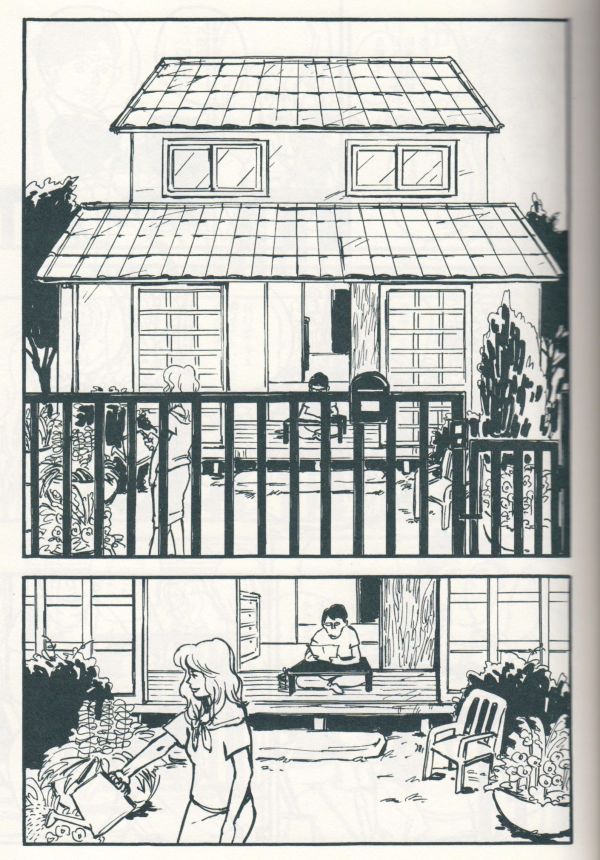 This sort of thing happens enough in Japan that the police can be kind of blasé about it, unwilling to label it a missing person case and actually investigate. Salarymen crack from the pressure of their jobs, stifling home lives, financial worries, whatever and vanish. Plus Lisa’s a foreigner and no matter how good her Japanese is (insanely) or how integrated she is into Japanese life and society (incredibly), she’s still a foreigner and is thus taken less seriously in all kinds of tiny ways (microaggression!). So Lisa doesn’t really have anyone in her corner, other than Tsumi. But Tsumi is still just thirteen years old and doesn’t really have the best ideas on how to help Lisa.

Maybe because I have also been a foreigner in Japan who speaks Japanese and who has friends who are in Lisa’s exact situation (minus the disappearing husband), I can overly relate to so much of this story. It’s a precarious thing to give up your life in your own country for a new life with someone in another country, and it doesn’t always work out. And when you have invested so much of yourself in your new life, what do you do when it doesn’t? Where do you go? Lisa’s slow slide is hard to watch, but Yamamoto writes from Tsumi’s perspective so that it’s hard to tear your eyes away. You wince and flinch with every new development, but you keep reading and hoping. You want Lisa to be happy. You want Tsumi to be happy. So you understand only too well Tsumi’s clumsy efforts to make Lisa happy again. 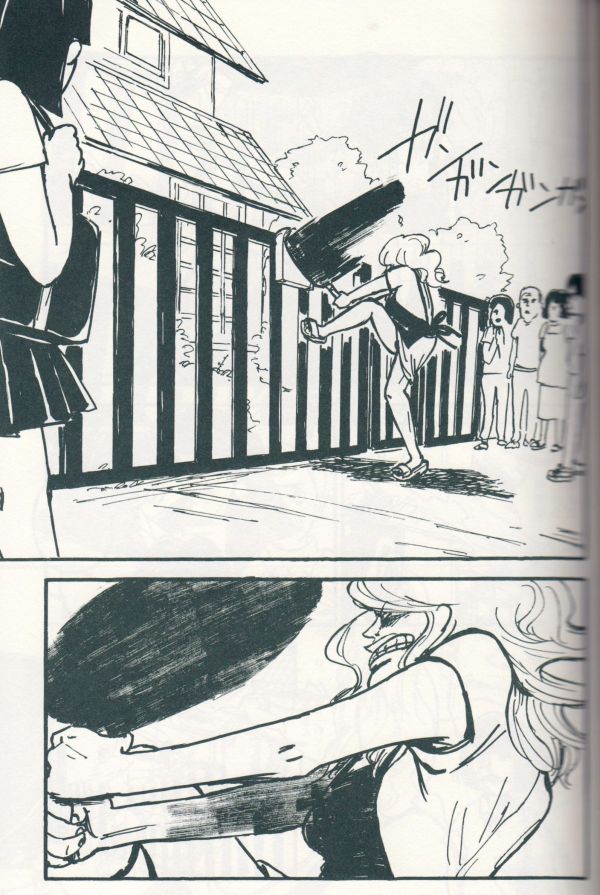 The book is printed in a dark green, rather than black, a choice I’m not sure I quite understand. I like it, though. It’s an interesting change from the usual and constantly reminiscent of the garden Lisa loves, not to mention how it gives the whole story a more organic feel. (Maybe that’s the point?) Yamamoto’s lines are similarly organic and fluid with not a hint of screentone anywhere to be found. She uses streaky brushwork and scribbly lines to great effect in scenes of urgency and confusion. The lines are so expressive and fluid, and her panelling is so cinematic and perfectly in tune with the story she is telling that the characters really move on the page. She clearly thought long and hard about each and every panel and the best way to convey the mood and situation, something evinced by the “director’s commentary” at the end of the book in which she discusses chapter by chapter her choices for panels and artwork and why she made them. 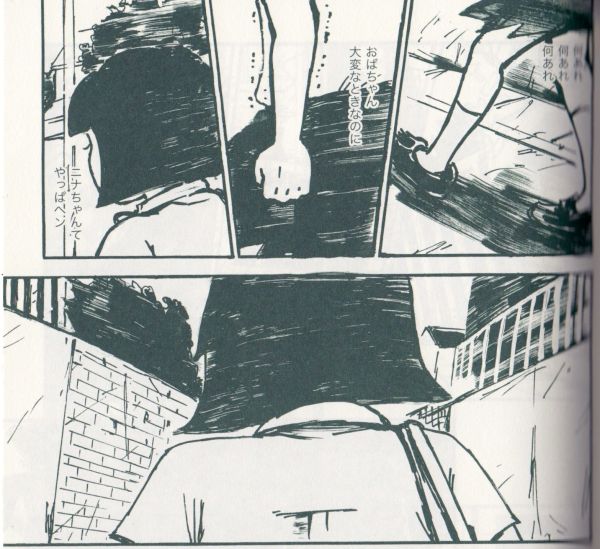 I can only think of one other manga I’ve read that was published first as a standalone book, rather than serialized in a magazine, and that’s the similarly incredibly well thought out GoGo Monster by Taiyo Matsumoto. But Matsumoto was able to pull off this rare feat because of the monster hit his Ping Pong became, which gave him a lot of leverage in the world of manga. I have no idea how Yamamoto managed it, but I’m so, so happy she did because this is the kind of story that really needs the slow burn of a book to itself, rather than the competition of the pages of a manga magazine. The anxious tension of How Are You? needs your complete attention to work its magic to the fullest. (And I suppose this is where I insert the obligatory plea to publishers to print this in English and hire me to translate it.) (Seriously, though. This is a work that resonates across national/linguistic boundaries. It’s got award-winning written all over it.) 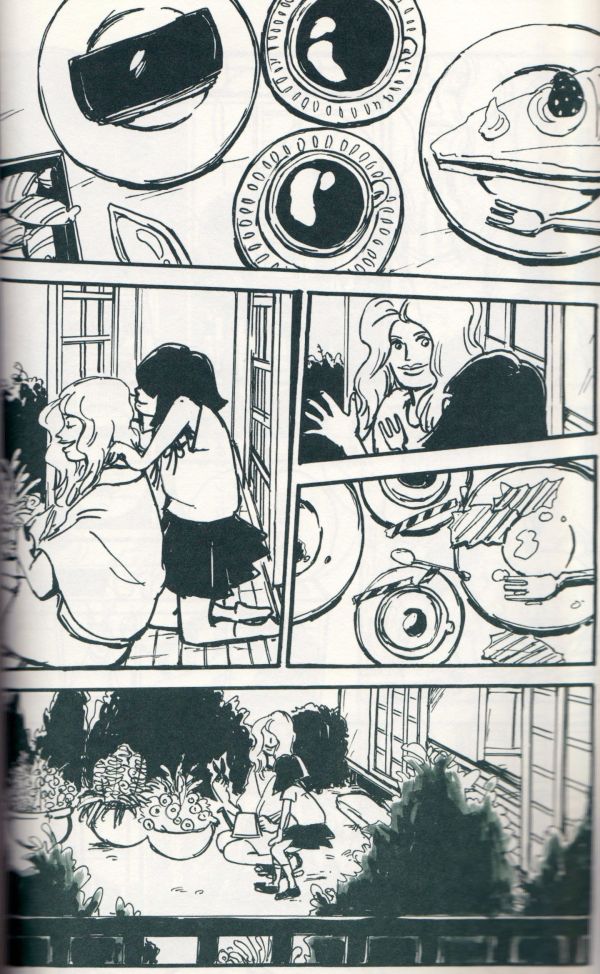 UPDATE: Gulf Coast was kind enough to ask me to translate excerpts of this fine, fine book. Go grab their Winter/Spring 2017 issue for all the English action!