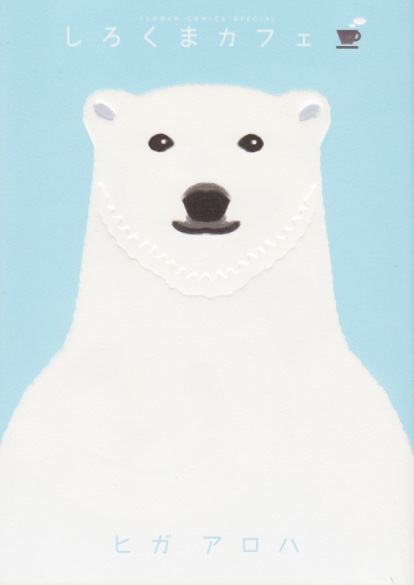 So I’m back in Canada. My plane did not crash. And if you follow me on Twitter, you will already be aware that it was full of shrieking babies. Lots and lots of ear-splitting screams to keep me from slumber. Not that I generally sleep on planes anyway, but I do this thing where I pretend I’m sleeping because I have this strange belief that if I just lie still and keep my eyes shut, that is basically as good as sleeping. (It is not.)

With all the screaming, I couldn’t focus on pretending to sleep, so I had to cut that short and get back to reading one of the many books in my carry-on bag. And I had quite the selection, having spent two months doing almost nothing but buying books (well, I also did some interviews and stuff that you’ll probably hear about at some point, but you know that these are also book-related). The problem with books and travelling is that books are really, really heavy (don’t tell me to go digital. I love paper books, no matter how many trees have to die for them), and you get the same suitcase and weight allowance whether you stay in Japan for a day or a year. So I had little choice but to cram as much as I could into my carry-on and then pretend that it didn’t weigh more than the allowed ten kilos. (It did.)

After I finished the first volume of Golondrina (we’ll talk about that one later because I have thoughts!), I decided to try Shirokuma Cafe, a relatively recent acquisition, i.e., purchased after I was already well aware that the number of books I had bought would put me over the weight limit for my luggage. But a certain comics impresario was so persuasive in recounting the delights of the anime of this manga that I gradually became convinced that I had to read it. And while my poor left shoulder, which bore the burden of the overweight carry-on, has its regrets, my brain has none. Well, maybe just that I didn’t pick up Volume Two while I was at it.

If you understand Japanese, then you are already aware that the basic premise of the whole thing is a cafe run by a polar bear (shirokuma). Much like the world of Gaspard and Lisa, where the two puppies in scarves go to school with human children and with the exception of their own dog families, live in a world populated by humans, Polar Bear’s Cafe serves mostly humans, with a select few animal friends joining in the fun. None of the animals have names, though. The polar bear is Shirokuma-san, the panda is Panda-san, and so on. For some reason, this really cracked me up the further into the book I got. It just seems so incongruous, to live so fully in a human world (including walking on their hind legs) and yet not get a name of their own. What if a polar bear showed up at Shirokuma’s cafe? Would she also be Shirokuma-san?

This is author Higa’s debut work and you can see this in the fact that the book starts off with four-page stories, which soon grow in length as the popularity of the whole thing takes off. The early four-page stories tend to follow a set format: Panda and Shirokuma hang out, Panda says something that Shirokuma puns around with, and then the punchline. It works surprisingly well and I missed Shirokuma’s puns in the later stories. 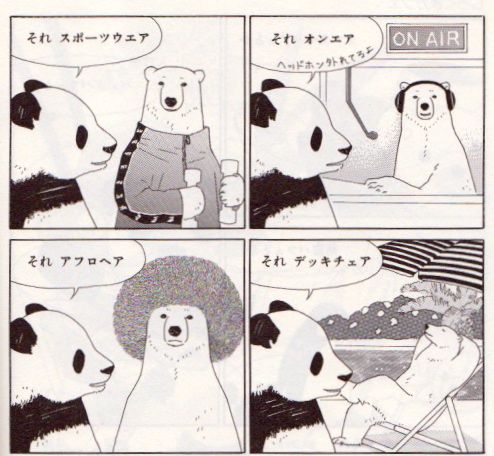 And the puns could actually help you out if you’re a Japanese learner. They’re all hilariously illustrated, with Shirokuma acting out each of his word plays behind Panda’s back. Another learner-friendly bit is the furigana accompanying all kanji. Plus the ideas, while hilarious, are not particularly complex.

For instance, Panda gets a job at the zoo. As a part-time panda. At the interview, when offered the position of panda, he seems disappointed and the interviewer is quick to mention that they are also looking for a gorilla and a moon bear, but after imagining himself in costume as these animals, Panda accepts the panda position. He mostly sleeps in the panda enclosure, while occasionally giving a little something extra to kindergarten kid tours by rolling around inside a tire. 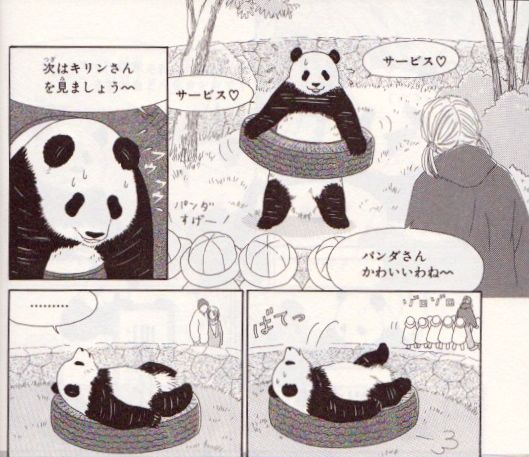 Or Panda dreams of being “wilder” somehow and wishes he could escape his boring panda life. So Shirokuma takes him to Grizzly’s bar, where gorillas play darts and shit gets real. (And of course the grizzly bear runs a scarytown diner style bar! Of course!) When Panda gets drunk, an alligator tries to eat him, but Grizzly scares him off. Although Grizzly is nearly as scary as the alligator.

Or Shirokuma and Panda go fishing off the pier and are greeted by a well-meaning human. “Hi, Shirokuma! Hi, Panda!” To which Panda sniffily replies, “ We actually have names, you know.” Both bears then give ridiculous and completely fake names. “So Ijuin? Really?” asks Panda of Shirokuma’s fake name after the human has shuffled away in embarrassment. “Of course it’s fake,” Shirokuma replies.

What really makes this comic work for me is the surprisingly realistic depictions of the animals. These are not cutesy cartoon versions of wild animals. Higa clearly references photos when drawing the animals, and yet the humans are cartoonish and lacking detail. Which works. After all, the humans are not even close to the main point of Shirokuma Cafe. It’s all about the strange lives of animals that hang out in cafes run by polar bears. (The stand-off between King Penguin and Emperor Penguin is particularly hilarious.) (As is Panda’s plaintive plea, “What’s the harm in a panda just lying about?”)