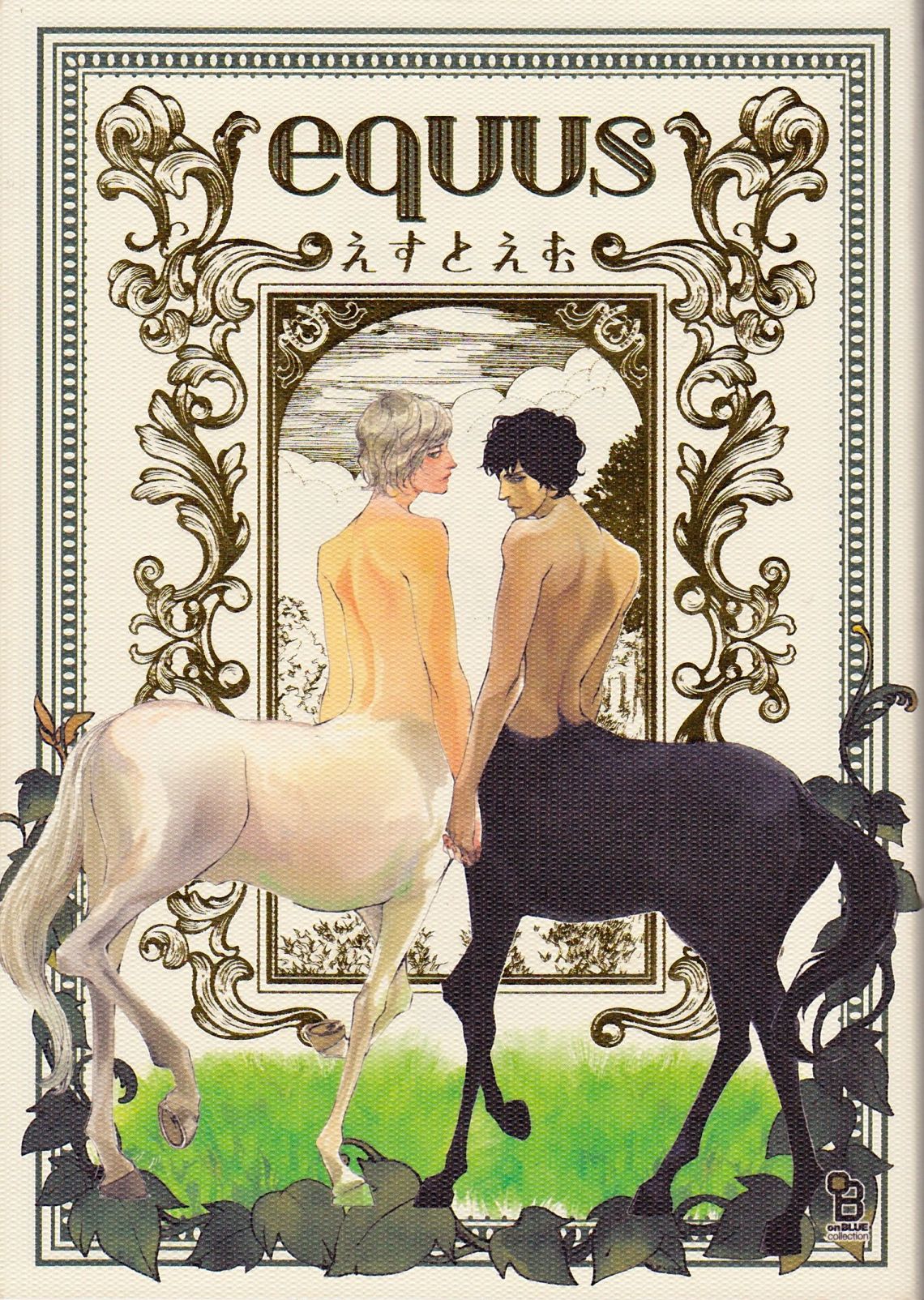 More centaur love! Huzzah! Because I know when you woke up this morning, you were thinking, “If I don’t see some centaurs in love today, I’ll stab my coworker in the eye with this dull pencil.” Good thing my brain is here to save your coworker’s vision. Because I finally read est em’s second foray into the world of the man-horse, only eight months after I got it. Yes, Mount Bookstoberead is that tall.

equus is an interesting bookend to est em’s slightly earlier work about centaurs, Hatarake, Kentauros! (Hatarake having been released about a month earlier than equus). Both obviously focus on centaurs, both are collections of fairly short stories, both are relationship-oriented Boys’ Love. But I felt that Hatarake had some silliness to it, especially the first half, whereas while equus has its humorous moments, it is for the most part, thoughtful and leaning towards sad.

The funniest moment in equus comes in its most explicit story, a story which did get me thinking about how exactly centaurs do it. A question the story thoughtfully answered for me a few pages later. If you don’t want to see a couple of horse-people making out and then molesting a hapless bystander, you should probably skip the story “Black and White”. I won’t ruin it for you by actually talking about how this ends up being funny, but it emphasized for me again just what a great writer est em is. She has such impeccable timing, and knows exactly when to say what for maximum effect.

And I’ve yet to come across a manga artist who manages to portray relationships in such a compelling and sympathetic manner. All of the men/horse-men portrayed in equus become vivid and real with just a line or two of dialogue and a few strokes of her pen. The art is, if anything, more minimalist, and yet so full of life and movement. The first pages of more than one of the stories feature nothing but the characters. No backgrounds, no shadows, nothing. And this has the effect of immediately preparing the reader for what’s going to be important.

This also carries through throughout the stories, so that more often than not, it is just the characters in any given panel. But until you start thinking about it, you don’t notice there’s anything missing. And I would say that there really is nothing missing. est em is looking at relationships. Everything is basically irrelevant to the stories she’s telling, and so she leaves them out, keeping it bare bones and holding her readers with the power of her storytelling.

A few of the stories are little slices of life, moments cut out of a larger picture. But some reach out for larger arcs, notably “Gray” and the chapter-spanning “Bay Silver”. And interestingly, both of these stories have a generational approach, allowing you to see a larger picture of the centaurs who are the protagonists.

In “Gray”, an old man on a horse trots alongside an older-looking centaur, both dressed in the same traditional archery costumes. With this beginning, the reader is put on unsteady footing: Just when is this happening? Where? It quickly becomes clear that the older man is participating in a yabusame horseback archery display. But snippets of past lives are woven into this, battles fought long ago, and you start to see that the centaur accompanying the archer has been with his family for generations, teaching them archery and protecting their families. It’s incredibly beautiful and so moving to watch one of the noblemen from this past move from child to adult under the watchful eye of the centaur, and finally into battle to die. And when you come back to the modern-day archer, there’s a poignancy as you realize he’s already in his declining years and that the centaur will outlive him too.

“Bay Silver” is an entirely different kind of service, and the first dark look at a world where centaurs live alongside humans that est em has given us. In most of est em’s work, there’s an unspoken acceptance of the relationships she creates. Generally, hers is a world in which being different does not make you an outcast. More often, it’s a world where there is no difference. Being gay is often seen as the same as being straight. But “Bay Silver” offers up a world in which centaurs are reviled, seen as animals and kept separate.

The Bay Silver of the title is owned by a very rich man, who is seen as a bit of a weirdo for exactly things like the fact that he owns a centaur. The young protagonist, this rich man’s son, grows up watching his father trot out the bound and gagged centaur at parties to amuse his guests. When his father dies suddenly, he inherits everything, including the centaur. And it turns out that his father inherited the centaur from his own father, so it’s sort of this perverse family entertainment. The son can’t stand how cruel his father was to this magnificent creature, but can’t find a way to reconcile his own feelings towards it, so he tries to let it escape, but the centaur doesn’t take the chance to leave. Instead, he waits for his young master to come to him, so that he can sex him up.

The young man is horrified and runs away, but eventually succumbs to the centaur’s charms and his own feelings. He tries to make the centaur socially acceptable, having clothes tailored, making him read tons of books, forcing him into the young man’s social class. But when he brings the centaur to a party, they face only derision. Before the party, though, before the decision to make the centaur socially acceptable, the centaur tells the young man about his past. And these pages are perfect in their simplicity. The centaur tells a dark story, and the pages are accordingly black, with only the dialogue balloons and centaur bits breaking up the darkness. This is so incredibly effective, especially in contrast to the rest of the pages of the story, which are mostly white.

So again, I read a book by est em, and again, I really liked it. I’ve been reading her work for a while, and the thing I’m realizing now is that she just keeps getting better and better. The irrelevant stuff is pared away, and you’re left with an incredibly told story that’s moving without being heavy-handed. Her new book, Golondrina, just came out the other day, and I’m having a hard time not ordering it RIGHT NOW because I can’t wait to see where she goes next. But Mount Bookstoberead threatens to topple over and kill me in my sleep, so I’ll be patient a little longer.